Are You Ready to Go “Wire to Wire” at TBOX This Year?

If you can make it to the Opening, Closing, & 12 Bars in Between, that’s going “WIRE TO WIRE” at TBOX, a tradition we began with TBOX back in the olden days… read more!

In sports, the term “Wire to Wire” means to not only WIN but to be leading the entire time, in first place from the first to last day of the season — it originated with horse racing (literally, the starting and finishing wires) – and now serves as a reminder: “You’re having the time of your life at 11AM? Guess what? You’ve got 9 hours to go!”  And although crawlers at TBOX and our other events are not required to go from start to end, we respect and admire those partiers with the skill and dedication to pull it off!

This all started when Mr. Festa recognized people for going WTW at TBOX #3 in 1998.In 2002 we had the idea, “Hey, why don’t we actually GIVE people actual WIRE?”  Green wire at Bar #1, and red wire at Bar #12. Collect both, and you’ve officially gone WIRE TO WIRE BABY. Besides a few people thinking it was licorice and trying to eat it, it became a key part of TBOX tradition. 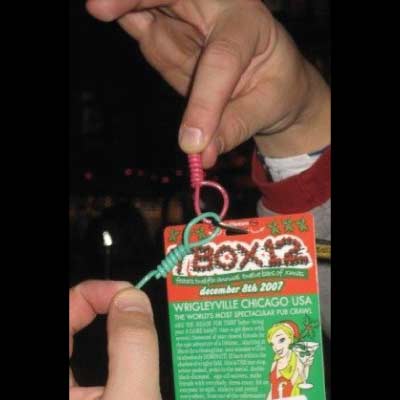