Hairbangers Ball to Rock Out at TBOX 2019

High Octane, Popular Chicago Band Hairbangers Ball to Perform at TBOX 2019 12 Bars of Xmas Bar Crawl Saturday December 14 in Wrigleyville Chicago. TBOX attendees can rock out to Hairbangers Ball bright and early, starting at 9AM at Cubby Bear – just in time for TBOX opening ceremonies! Rock out with us at TBOX, buy your tickets here!

Born from a “what if?” scenario, Hairbangers Ball has entrenched themselves as one of the most sought after “80’s Hair Rock Tribute Bands” in the United States after years of performing sold out shows from coast to coast, all while exuding the same expert musicianship and flair for the theatrical as their idols. Hairbangers Ball will be rolling through the “Decade of Decadence” with attendees at TBOX 2019! 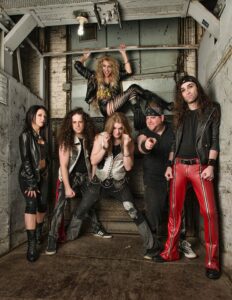