In 2003, the Chicago Cubs and the infamous Steve Bartman played a huge role in the future of TBOX. In the pre-2016 World Series days, Wrigley was filled with angst… but TBOX was there to fill the void.

The following is written in first person as narrated by TBOX Founder Christopher Festa.

Flush with the success of 2002, I began planning TBOX in mid 2003. But as Cubs fans know, that was THE YEAR we were going to the World Series, until Game 6 of the 2003 NLCS. It felt very different than 2016 when we really did win it. The ’03 team came out of the blue, was suddenly in the playoffs and then one step away from the World Series. It was like a dream.

In May of that year, again freshly unemployed, I decided to forget about finding a new job, and start t-shirt company. I had this idea to make a shirt with the slogan “IN DUSTY WE TRUSTY” – to rally the new manager Dusty Baker. And by the fall, the shirt had caught on like wildfire. I got to meet Dusty, I was all over the news, and selling tee shirts by the wheelbarrow!

As the Cubs went into the NLDS, “IN DUSTY WE TRUSTY” had become THE rallying cry for the ’03 Cubs and manager Dusty Baker. TBOX was on the back burner as we planned for a WORLD SERIES in WRIGLEYVILLE and I was selling shirts like CRAZY and blowing up all over the media. I was on top of the world… right up until the moment Steve Bartman’s infamous miscue sent the cursed Cubs careening toward disaster. 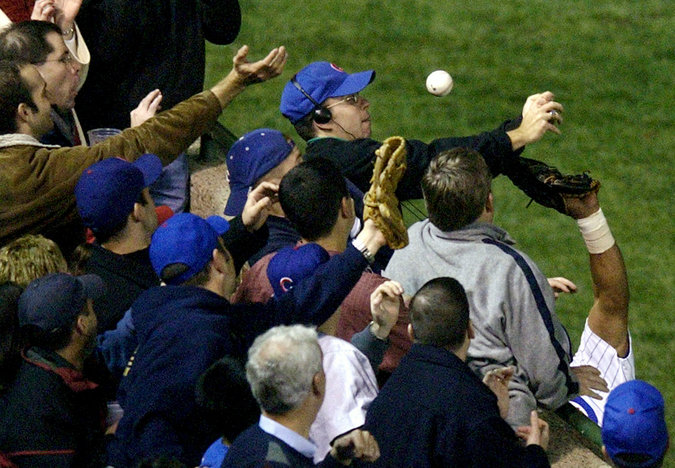 I know so much has been said and written about this poor guy, and I hold no ill will against him, but I believe he hurt my interests personally as much as anyone. Not only did my Cubs blow it, but my business was ruined (all the millionaire ballplayers still got paid…) So rather than selling a million more shirts in a sweaty, ecstatic Wrigleyville lovepile, I let myself feel sorry for myself a while with the rest of Cubs Nation, and spent 3 weeks in bed with the shades drawn, unshaven, surrounded with empty pizza boxes,my business destroyed. What now?!?! I had tasted the fruits of entrepreneurial success, then had them swatted away. I really didn’t want to get a “real job” again. And sometime before Thanksgiving I said, the words that changed my life popped into my head…

“Hey, What if I charged people something to come to TBOX?”

And from there forward, thanks to the engine of capitalism, TBOX really started on its way. As you are all now my customers, it is my sacred duty and job to serve you the best I can at all times! So when your on your 17th beer, wearing pajamas, covered in