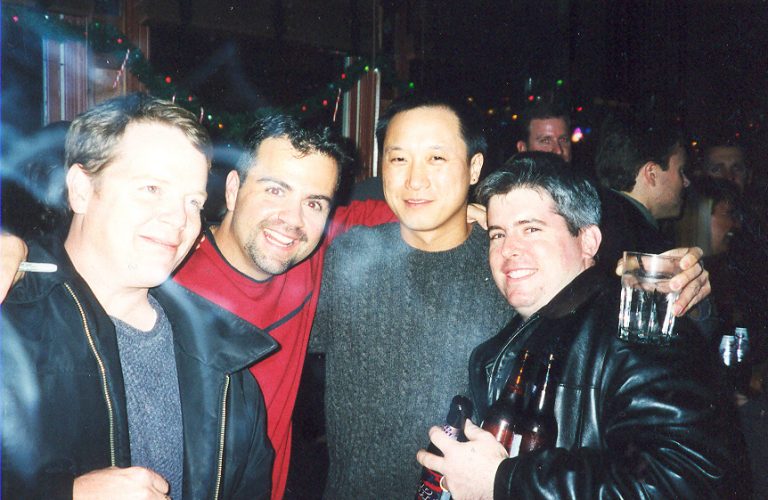 One of the Only Photos from TBOX 2001

In 2001, TBOX carried on for a 6th Year despite Mr. Festa temporarily living in California, and the after-effects and sad atmosphere that remained from 9/11. But the show went on…

By TBOX time in 2001, I was now unemployed, another relationship had ended, and I had given up my Chicago apartment. I had taken a 2-month solo cross-country road trip over the summer and in the fall, I was planning a trip to Europe to further help “find myself” for a few months and use my last frequent flyer miles. Unfortunately, and it’s an absolutely true story, I bought my ticket to leave on Tuesday, 9/11/2001 – I was all packed and ready to go… but the trip never happened. If I’d left one day earlier, my entire life would have been different… By late October, I found myself house-sitting for my friend L.A. Michelle, spending my days at the Coffee Bean and Tea Leaf in Santa Monica, half-heartedly looking for a new job. With the cloud of 9/11 hanging over the country, I wasn’t thinking much about TBOX, but the emails started to come in again – WHAT DAY IS TBOX? And if I canceled it, the terrorists would win, right? So TBOX #6 was on!

I flew in to Chicago Thursday night before TBOX to crash on my friend’s couch and then was going to do some planning on Friday, but at 6am I started getting calls from strangers asking about TBOX. Unbeknownst to me, it had been listed in this new web site called Metromix, with my personal cell phone number, so I spent all day answering the phone! We ended up with over 1,200 people, and I wrote the first numbers on my friends’ hands at the Pre-TBOX Brunch we had. And it was there that having